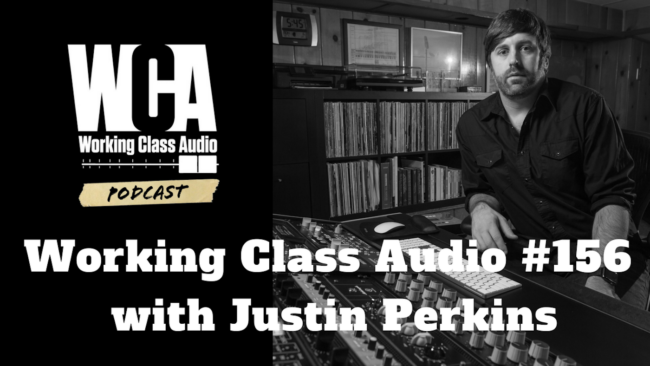 Justin Perkins has been recording music since his mid-teens. It all started in his father’s basement then progressed to recording studios around the state of Wisconsin including the renowned Smart Studios in Madison, Wisconsin before relocating to Milwaukee, Wisconsin where he now has his own mastering studio called Mystery Room Mastering. Justin’s clients include Tommy Stinson, The Replacements, The Figgs, The Gaslight Anthem, Daryl Stuermer, Screeching Weasel, The Mr. T Experience, The Smoking Popes, Limbeck, Miles Nielsen, and Tenement. Justin also recently mixed a new documentary about the legendary 90’s band Jawbreaker called “Don’t Break Down”. Outside of the studio, Justin has played bass in some of his own bands as well as with the newly reformed Bash & Pop, Tommy Stinson, Paul Collins Beat, Cory Chisel, and a few others.

Every time I post about a new WCA show on Twitter there was always one guy who liked it, shared it, or commented on it and that was Justin. Naturally, I wanted to know who Justin Perkins was and why he was always liking the show so one day I visited his website Mystery Room Mastering and it was then I fully understood just how badass this guy was plus I was just blown away at the thorough nature of his website. Justin had reached out before to invite me to a Bash and Pop show he was playing in San Francisco (I was unable to go) so I wasn’t completely unaware of his background but I had to talk to him! So after reaching out, scheduling, and conducting my interview I had a whole new appreciation for Justin. We chat about his journey and his website and the usual WCA topics (clients, business, work/life balance, etc…).  -Enjoy!