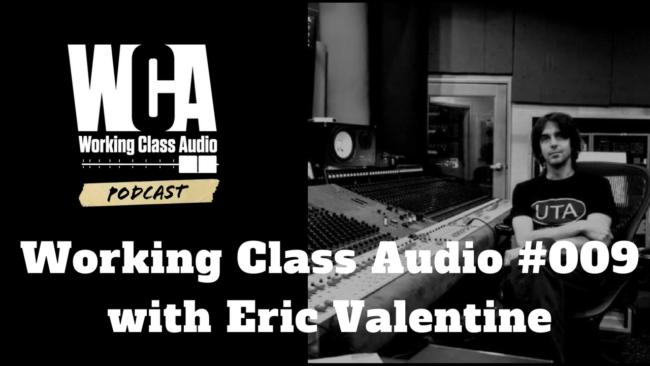 Eric Valentine got his start in music when his reluctant parents agreed to buy him a drum set from a garage sale for $50. He then started drum lessons at age 9. By the age of 12 he was making recordings of drums and his brother’s guitar with home stereo equipment and radio shack adapters. In high school he finally was able to get a 4 track (Tascam 244 Porta Studio) and began recording anyone and anything. By the age of 17 he and a friend opened a 16-track studio in his friends parents garage. With an add in BAM (Bay Area Music) magazine announcing “Studio Time for $10/hr.”, His career in the recording business had begun.

After years of working in the small studio in various locations the band he was playing in finally got a record deal with Hollywood records. One of the stipulations of the deal was that Eric would be producing and engineering the record and instead of spending the budget in an expensive studio we would use the money to upgrade the band’s studio. So, with the purchase of an 8038 Neve console (from Ocean Way Studios) and a Studer A800 mkIII 24 trk, Eric finally had a few top-notch pieces of gear to work with. At the age of 20 years old Eric managed to produce, engineer, mix and play the instrumentation on the hugely ambitious self titled release of the band T-Ride. Ultimately, the band did not achieve the commercial success expected and Eric moved on to focusing his energy on recording other local artists in the Bay Area.

He spent a couple of years working with the rap artist Paris. Eric recorded Paris’s 3rd LP and 2 albums for a group called the Conscious Daughters. Through a connection with Bill Graham Management, Eric had an opportunity to record and co-produce several songs with Joe Satriani. Finally in 1996 he met up with two local bands Smash Mouth and Third Eye Blind. After doing several rounds of demos with 3EB, they acquired a record deal and Eric stayed on board to engineer, mix and co-produce the album. The demo done with Smash Mouth had generated a lot of interest but hadn’t landed them a record deal by early 97. The band’s manager and Eric agreed that they would finish an album without a deal and get the ball rolling them selves. They kept 4 of the original demos and recorded 8 additional songs in a total of 16 days and had an album finished by April of 97’. The plan was to take the finished record to LA to master at Bernie Grundman (with Brian Gardner) and then let the bands manager and lawyer shop the record.   Within 4 days of mastering the album the band was signed to Interscope and the song “Walking On The Sun” was being added to KROQ in Los Angeles.

Through the summer of 97’, Eric spent a few months touring with Smash Mouth as the bands keyboard player. Soon 3EB’s first single “Semi-Charmed Life” was racing up the charts. With “Semi-Charmed Life” and “Walking On The Sun” battling each other for the #1 position in radio play, the phone started ringing and offers started coming in. Over the next few years, in addition to recording Smash Mouth’s follow up LP “Astro Lounge” Eric worked with bands such as Citizen King, SRC, David Garza, Death Ray, The Dwarves, Tom Coster, Vital Information and Scapegoat Wax.

After living and working in the San Francisco Bay Area all of his life, Eric decided to make the move to LA. In early 2000 he closed up the infamous “H.O.S.” or Hunk of Shit Studios and acquired a new spot in Hollywood. Eric has now moved into what used to be Crystal Studios, A beautifully constructed location with an incredible history. With the new studio named “Barefoot Recording” (http://barefoot-recording.com/) Eric continued making records in Los Angeles for the last 14 years. At Barefoot Eric has recorded many exciting and successful albums including the third Smash Mouth Record, “Songs For The Deaf” by Queens of the Stone Age, Good Charlotte’s “Young and Hopeless” and “Chronicles of Life and Death”, the last Dwarves album “The Dwarves Must Die”, The Lostprophets “Start Something”, Nickel Creek “Why Should The Fire Die”, Taking Back Sunday “Louder Now”, Persephone’s Bees “Notes From The Underworld”, Maroon 5 “It Won’t Be Soon Before Long”, Slash “Slash”, and the recent self titled Taking Back Sunday album. Accumulatively Eric Valentine’s recordings have sold almost 60 Million units worldwide.

He has recently added a new facet to his record making endeavors, a recording equipment design and manufacturing project (http://undertoneaudio.com/). Undertone Audio is currently designing a Fully Class A discrete recording console with un paralleled sonic integrity, flexibility and functionality. A key component of the console is a revolutionary equalizer design with features never seen in a Class A circuit before. The UTA consoles are installed in both of the rooms at Eric Valentine’s Barefoot Recording facility. They have been up and running for over two years now and this year UTA expects to sell 4 or 5 consoles to buyers all over the world. Undertone Audio is now focusing efforts rack mount equipment including the MPEQ-1 channel strip based on the same equalizer in the large format consoles. The channel strip also includes a uniquely flexible Class A mic pre and DI.

Eric chats with Matt about Undertone Audio, DIY acoustics, recording Dave Grohl & Dennis Chambers plus working his ass off and the importance of bringing your A game. Moto the Bulldog makes an appearance by snoring during the interview.