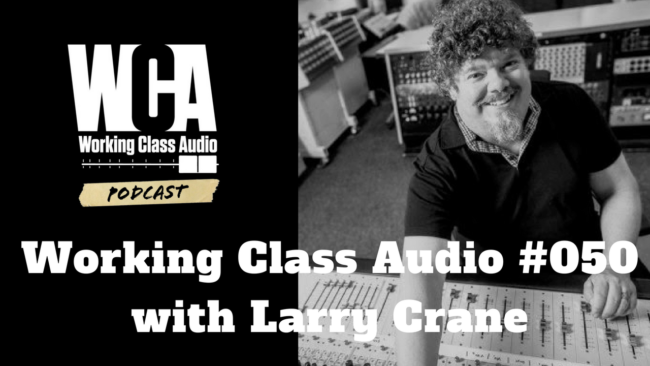 Larry Crane has been involved in music since the late seventies, when he self-released home recordings of his own music. Since then he’s been a musician, record producer/engineer/mixer, Tape Op Magazine founder and editor, book editor, studio owner, archivist, disc jockey, small label owner and even a record distributor employee.

From 1994 to 1997, Crane ran Laundry Rules Recording, a home studio in his basement in Portland, where he recorded artists that include Versus, Stephen Malkmus and Cat Power. Since 1997, Crane has owned and run Jackpot! Recording Studio, Inc., a busy mid-sized studio in Portland, where he has worked with artists such as Sleater-Kinney, The Joggers, The Decemberists, Jenny Lewis, M. Ward, The Go-Betweens, Elliott Smith, Death Cab for Cutie, The Thermals, Stephen Malkmus, Quasi, The Portland Cello Project, Jason Lytle and Richmond Fontaine.

Crane has spoken on and moderated panels about recording for TapeOpCon, South by Southwest, North by Northwest, the National Academy of Recording Arts and Sciences, Potluck Audio Conference, Indie Music Forum and College Music Journal. He has worked in the past as a record label owner, radio station music director, disc jockey, record distributor employee, freelance music journalist and band manager. Starting in 1984, he has been a bass player in several bands, including Elephant Factory, Vomit Launch, Sunbirds, Foggy Notion and Flaming Box of Ants.

Larry and Matt talk about almost 20 years of Tape Op Magazine, his experience running Jackpot! Recording, the symbiotic relationship with pro audio manufacturers, working at other studios and a little business advice.

Photo by By Jason Quigley