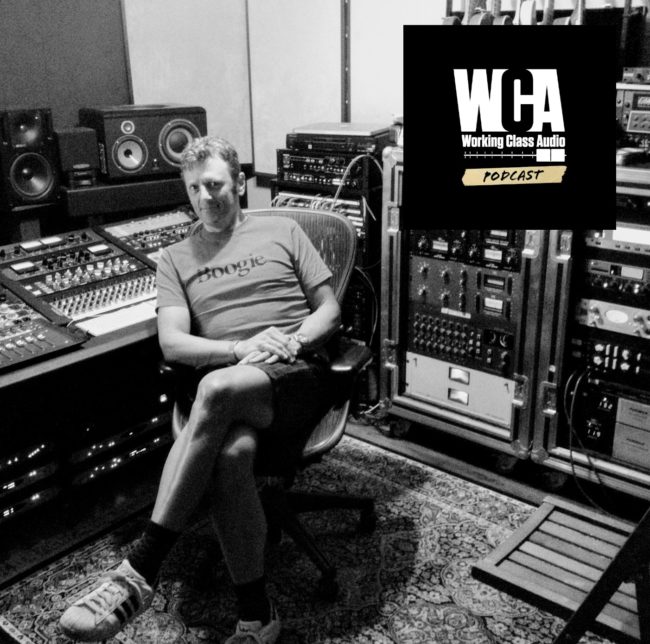 Michael James is a  New York-born producer/mixer/engineer and has also been a an A&R rep as well as an solo artist himself. He’s worked with  New Radicals, Hole, Far, Robben Ford, L7, Edwin McCain, Chicago, Reverend Horton Heat, A.J. Croce, Butterfly Boucher, Jane’s Addiction, Maia Sharp, The Coronas, and Jawbreaker and many more.

At 19 years of age, Michael  met former Blue Cheer member Ethan James (no relation), the owner and creative nucleus of Radio Tokyo. Michael had just recorded a single, which cost him $15 in studio time.  Ethan happened to walk past the control room as the mix was being played, and offered Michael a record deal on the spot. Ethan took the disc to KROQ-FM DJ Rodney Bingenheimer, who debuted it on his legendary show, “Rodney On The ROQ.”  It was later added to the station’s playlist. From there, Michael joined the band Waves Of Grain, whose indie release “Catch Me I’m Falling” placed Top Ten on several college radio playlists; it was later licensed in the UK, France and Germany.

By then however, Michael decided he was to be a producer and engineer, not an artist. He served as a staff producer and chief engineer at Radio Tokyo from 1986-90, where he recorded classic rock giants such as Ray Manzarek (The Doors), John Lang (#1 songwriter of “Broken Wings” and “Kyrie”), Richard Page (Mr. Mister), and L.A. session aces Abe Laboriel (Larry Carlton) and Alex Acuna (Weather Report).  An unsigned band from New York called Too Much Joy came to L.A. to record a demo at Radio Tokyo, which had become a Mecca for credible indie bands.  Michael was given the chance to produce a few tracks for the band. When Too Much Joy was signed by Alias Records, they asked Michael to produce the album Son of Sam I Am.  Rolling Stone, New York Times and Billboard praised the album and Michael went on to produce the band’s major label debut for Irving Azoff’s Giant Records.

Michael soon encountered a band called L7, who asked him to produce their debut album, Smell The Magic for Sub Pop Records. Sub Pop liked it enough to ask him to produce several other artists on the label, including Reverend Horton Heat, who generously offered to perform at Michael’s wedding reception!  And then there was Courtney Love and her band, Hole, whose Sub Pop debut he produced. Michael was taken with Courtney’s sense of style, as well as her sense of where she was destined. “My goal was to keep the intensity while highlighting the pop element,” he says.   Michael went on to work briefly with Jane’s Addiction, Mazzy Star and the critically acclaimed Geraldine Fibbers.

After an introduction from Sheryl Crow and Beck bassist Dan Rothchild, venerable WEA and Elektra Records founder Jac Holzman tapped Michael to be Head of A&R and Producer at his Warner/Discovery label. Michael made it a point to listen to the boxes of unsolicited tapes that came in until he found Canadian band, Sal’s Birdland, which he signed.  Later, they changed their name to Artificial Joy Club and Michael brought them to Interscope Records for their second album.  The band’s first track wasted no time in ascending to the Top 20 of the alternative airplay charts.  Michael quickly found his next hit, New Radicals.  Working under the radar and without a record deal, he and singer Gregg Alexander slipped into the studio during downtime to work on the album.  Not only did Michael mix, but he also played the guitar solo on “Crying Like A Church On Monday.”  When Michael “shopped” the album, it was repeatedly rejected. The major labels claimed “the stigma against male singer/songwriters” was insurmountable.  Ultimately, however, MCA Records saw the light, selling over two million units of Maybe You’ve Been Brainwashed Too and securing Michael his first Gold and Platinum credits.

Encouraged by Alexander to play and write more, Michael began taking on more work as a session musician.  He wrote several songs with A.J. Croce for Transit, including the hits “Maybe” and “What I Wouldn’t Do,” and played lead guitar on the album, which was recorded mostly live in the studio.  “There’s no substitute for having a tight band perform live,” he says, “because that’s how you get the best vibe; that’s how you capture a great moment.”

Michael founded IndieProMix, a remote service that provides bona fide professional mixes to independent recording artists, at sliding scale prices.  “I pitched a few of my favorite mixers (David Kahne, Matt Forger, Tony Shepperd and Rob Chiarelli) the idea of giving back to the indie community because we all started as indies,” says Michael.  “Many super-talented indies only dream of having their music mixed by pros with hits, so we decided to give them the pro experience while keeping our thumbs on the pulse of fresh new talent.  We thought it would be a ‘cool’ thing to do, just because we could.  It’s been a win-win since we launched in 2010.”

Michael recently launched The Platinum Legacy, a series of pro bono seminars in which he and Grammy winning producer Rob Chiarelli (Will Smith, Madonna, Erica Campbell) share their hit-making tips and tricks, and how to deploy them in today’s modern analog-digital “hybrid” studios.  When asked how he expected a pro bono venture to be successful, Michael responded, “It’s the right thing to do.  Up and coming artists don’t have the same mentoring opportunities that I had, so I’m doing my part to keep classic recording and production techniques alive.  Plus, more generosity yields more abundance in my life.  I’m confident that it will work out well, as it always does.”

Michael has become one of the most respected and sought-after sound design consultants to the pro-audio industry as a result of his roles as a preset/algorithm designer and beta-tester for several highly successful, award-winning products from Lexicon, Eventide, Sound Toys and TC Electronics, among others.  He is a long-time endorser of Mesa/Boogie Amplifiers, Tom Anderson Guitarworks, Taylor Guitars, Eventide, Manley Labs, Dangerous Music, Chandler Limited, Avalon Design, Tonelux, Glyph Technology and SIT Strings.  “The endorsements, the product development, even the seminars and master classes I’ve taught,” says Michael, “are a logical extension of what I do in my daily activities in the studio. To my clients in those sectors of the music business, my ‘real world’ experiences are valuable in their laboratory or classroom settings. For me, those relationships are critical for two reasons: I contribute to the development of new products which are both practical and creatively stimulating to my recording colleagues and to me; and exercising the technical side of my brain magically broadens my artistic horizons when I’m making records.”

Today Michael is in constant demand as a mix specialist precisely because of his multi-faceted skill set.  As a writer-mixer, he knows when to make the technology get out of the way of the song and the artistry.  As a musician, he can completely rearrange a song when an artist wants to dig deeper—even at the mix stage.  He is frequently hired to do just that, often performing new guitar, bass and keyboard parts at the artists’ request, breathing new life into the song and the mix.