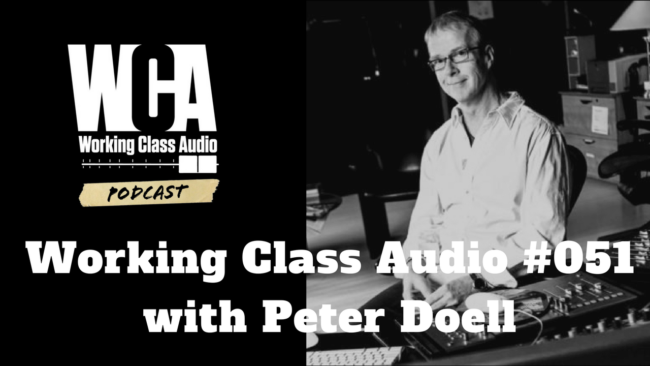 Peter Doell is a senior mastering engineer at Universal Mastering.

Growing up in a house filled with music Peter studied the ʻclassicsʼ by day, but escaped to play – way underaged – at night in bars & clubs to gain the requisite “chops” – playing rock, blues, and jazz throughout high school. Although entering college in a pre-med program, he quickly re-found his musical bearings, and graduated with a degree in Electronic Music Composition! Upon completion of his degree, he went on to be a journeyman musician and engineer, and after several years working in recording studios in Boston, relocated to LA in 1980. His entrance into the recording scene there was facilitated by his technical background, and got a staff position at Capitol Studios as a studio tech. But he quickly got “in the trenches” – in sessions there, recording everyone from Prince, Frank Sinatra, David Lee Roth, the Stray Cats and Miles Davis along the way.

The lure of films took him away from Capitol after 15 years, and he took a staff position at Sony Pictures Entertainment doing scoring. While there, his efforts were heard in films like “Black Hawk Down”, “The Patriot” and “Road To Perdition”.

Then he felt a desire to return to sound-only media – and has been a part of Universal Mastering Studios in Hollywood for the last 10 years. While there, Peter has mastered hundreds of projects for the likes of Robin Thicke, Fergie, Steve Lukather, WAR, Marilyn Manson, John Waite and many more. While just a few years ago, much of Peterʼs schedule was filled with mixing the music for Rock Band  and Guitar Hero video games where artists from the Universal roster were being featured. Nowadays, he still mixes a few projects, recently for artists such as Toby Keith, Rachel MacFarlane, Rhiannon and Otmaro Ruiz.

The recording scene nowadays has changed so much in the last decade. Peter has seen many of the old-guard first-call studios – AND engineers – fall by the boards as the new wave of record-making takes hold. But sitting at the “finish-line”, or Mastering, gives him a very valuable insight into what has become paramount in the making of modern recordings. He is here to share some of that with you.

Matt and Pete discuss age, what makes Universal Mastering special, working at facility versus working as a freelancer, low-end management, Pete’s new video series The Star Chamber, and the brilliance of Al Schmitt.