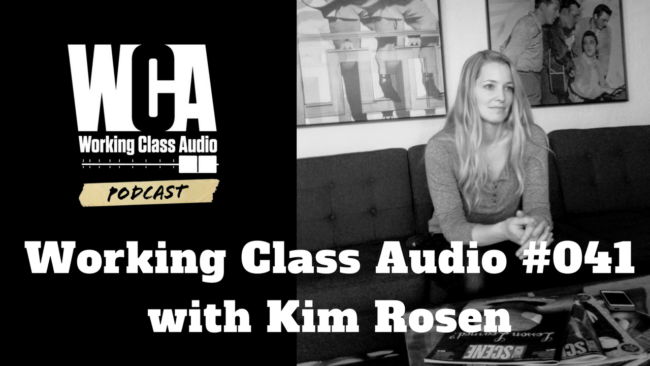 Kim Rosen grew up in the western Massachusetts town of Northampton. Known for its amazing college music scene, the town and surrounding area is infamous for spawning such ground-breaking acts as Sebadoh, Dinosaur Jr. and Buffalo Tom…just to name a few.

Kim realized early-on that music was a driving force in her life. She poured herself into the local music scene while searching out a way to carve a path for herself. It was in the summer of 2001 that a friend turned her on to a mastering studio in NJ that was looking for an intern. Kim jumped at the opportunity, moved to NJ and began her journey with West West Side Music.

After a couple of years in production, training and assisting in sessions, Kim was given the opportunity to take on her own mastering projects. While engineering at West West Side Kim racked up a few hundred mastering credits including notable projects from Jeremy Enigk, Franz Ferdinand, Dashboard Confessional and La Dispute.

In 2009 Kim dove in head-first and made the decision to go out on her own. She started Knack Mastering out of her home in Ringwood, NJ; building a proper room with the help of world-renowned acoustician Chris Pelonis, choosing the gear that would live in her racks and growing a client list from around the world that now includes producers and engineers such as Joe Henry, Paul Bryan, Ryan Freeland and Will Yip.

Over the last five years, Kim’s mastered albums from Bettye Lavette, Wynonna Judd, Jeff Bridges and the Abiders, The Barr Brothers, Sarah Jaffe, Title Fight and Anthony Green. She was fortunate enough to master the remake of the Johnny Cash album “Bitter Tears” for Sony Masterworks which featured artists such as Emmylou Harris, Steve Earl, Kris Kristofferson, Gillian Welch and the Milk Carton Kids. Another recent project was the beautiful Rhiannon Giddens and Iron & Wine rendition of “Forever Young” for the Series Finale of NBC’s blockbuster television series “Parenthood”.

Kim continues to build a client base of artists, producers, labels and engineers who trust her ears, her experience and, above all, her respect for their mixes.

Matt and Kim discuss parenting, clients, retirement and partnering up with Nashville based studio Welcome to 1979.