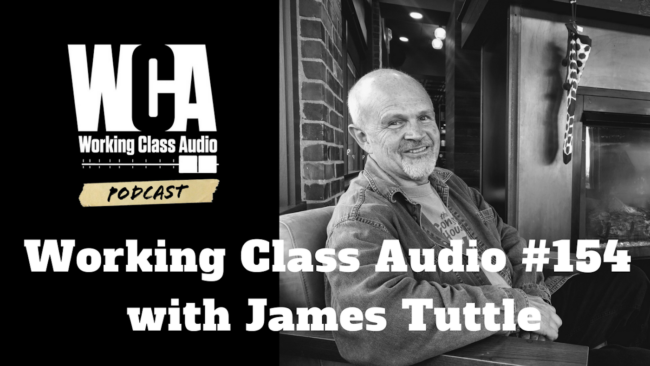 James Tuttle is an recording/mixing engineer and producer with 40 years in the trenches. After growing up playing in local bands in the midwest and Colorado he traded his place on stage for a place behind the console and never looked back. He has worked with everyone from Carole King and Dan Fogelberg to Joe Ely and Big Head Todd and the Monsters. He is a 2 time Grammy nominee for his mixing work with singer/songwriter Eliza Gilkyson and Jungle Jazz For Kids creator Mark Oblinger. He currently lives outside of Boulder, Colorado where he returned to after a stay in the fertile music mecca of Austin TX. He continues to be actively involved in making records with local and national artists. After a long affiliation with Airshow Mastering where he had a mix room, he now works from his home studio and from the Studio at eTown Hall.
His ongoing affiliation with the eTown syndicated radio show/podcast spans 20+ years where he is the chief recording engineer. Working on the eTown show has afforded him the opportunity to record and mix hundreds of  artists including:  James Taylor, Mumford and Son, Los Lobos, Michael Franti, Lyle Lovett, Imogen Heap, Rickie Lee Jones, Randy Newman, Ben Folds, Atmosphere, Emmy Lou Harris, Brother Ali and many, many more.

WCA #154 features US recording/mixing engineer and producer James Tuttle. James originally emailed me knowing I would be in Colorado to see if I wanted to sit down for coffee. Once I saw that James had a serious background I countered his coffee offer with a an interview in a local coffee shop. With my portable rig in tow we got caffeinated and talked money, E-Town  (https://www.etown.org/ ) where  James has been at the last 20 years, his connection to David Glasser , recording in Austin and being in Carol King’s backup band. Enjoy! -Matt