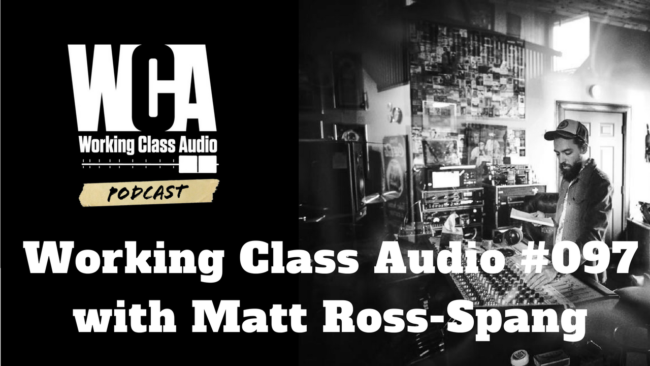 “He’s a young man with an old soul. Matt’s got a lot of Sam Phillips in him”  – Jerry Phillips

Matt Ross-Spang , born in Memphis, began working at the Legendary Sun Studio when he was just 16, working his way up from intern to the Chief Engineer. He championed to bring the recording studio back to its origin, working hard to find, install and use the same period equipment that Sam Phillips engineered with in the 1950s. His 11 years of dedication to Sun and its signature sound garnered national attention when he was featured by Lester Holt for NBC’s Nightly News and the Today Show. NPR also featured Matt and his work on All Things Considered.“It’s fantastic that [Ross-Spang] has pursued this with such scholarly devotion,” says Peter Guralnick, author of the definitive, two-part Presley biography, Last Train to Memphis and the recently released biography, Sam Phillips The Man Who Invented Rock and Roll.. “Sam was systematic in thinking about sound and gave great thought to it — no square angles; the tiles. In addition, he felt there was something unique about the room at 706 Union. He didn’t know it when he rented it. To have reconstituted it is an exercise in creative archeology.”In 2015 Matt left Sun to venture out on his own as an engineer and producer.  His first project post Sun was to engineer and mix Jason Isbell’s “Something More Than Free” for acclaimed Producer Dave Cobb which would award him his first Grammy. The record broke several records debuting at #1 on the Country, Rock, Folk and Indie Charts. It also broke Americana Radio chart records , staying #1 for over 25 weeks. The record won Grammys for Best Americana Album and Best Americana Song for (24 Frames).Since then Matt hasn’t slowed down …engineering recent releases by The Drive By Truckers, Elle King, Mary Chapin Carpenter, Chris Isaak, The Rival Sons, Corb Lund, Lori Mckenna, Brett Dennen, Brent Cobb, Amanda Shires, Anderson East, The Sheepdogs and the concept album “Southern Family”. Matt also engineered, mixed and Co-Produced Margo Price’s debut album; entitled “Midwestern Farmer’s Daughter” the record was made in 3 days in 2014 at Sun Studio and released on Third Man Records. The record debuted in the top 10 Billboard country charts to critical acclaim and is already considered one of the best albums of 2016. Matt most recently was hired by Sony Records to mix 18 previously unreleased songs by Elvis Presley from historic 1976 sessions in the Jungle Room at Graceland which was released in August of 2016. Matt also recently produced albums on Sean Rowe, Patrick Sweany and UK artist Emily Barker.

Matt and Matt join each other over Skype for a conversation about’s Matt’s journey.